State-Sanctioned Killing of Sexual Minorities: Looking Beyond the Death Penalty

On 22 February 2021, Eleos Justice and Capital Punishment Justice Project launched their first report on the state-sanctioned killing of sexual minorities (you can watch their launch video here).  This report is a must-read for human rights activists, governments, and academics engaged in research regarding the discriminatory application of the death penalty. The report exposes the shocking extent to which sexual minorities continue to face life-threatening persecution around the world at the hands of state actors. With this rigorous study, the international community will be better equipped to hold human rights violators accountable and to protect those whose lives are threatened on the grounds of their sexual orientation. Below, the report’s authors describe their principal conclusions.

‘What we are facing is beyond what anyone could imagine, because reality is
much worse…’ (Khalid, Iraq)

Many will take for granted the acceptability of consensual same sex sexual conduct and the total inappropriateness of the state interfering with such behaviour. In 2020 alone, countries across the globe took positive steps towards legally protecting the rights of sexual minorities. To name a few, Gabon decriminalised same-sex relations; Bhutan approved a bill to decriminalise same-sex sexual conduct, and Costa Rica legalised same-sex marriage. As the world shifts towards inclusion and celebration of sexual diversity, it’s easy to overlook the fact that in some countries, including those that appear to embrace sexual diversity, sexual minorities continue to be subjected to violence at the hands of the state. In our report—State-Sanctioned Killing of Sexual Minorities: Looking Beyond the Death Penalty—we chose to focus on the most extreme form of violence—the killing of sexual minorities. We use the term ‘state-sanctioned killing’ to refer to instances where the state or its actors commission, condone, endorse, or enable the killing of sexual minorities.

This report is unique in two ways. First, it focuses on the killing of sexual minorities, as distinct from other forms of violence. Given the barriers to accessing data in this space, we chose to focus on killings as these are often the most visible manifestation of an overwhelmingly invisible form of violence. Second, our report focuses on cases where states are complicit in the killing. The rationale behind this is simple: governments are in a unique position from which they are able to take concrete measures to protect, or perpetuate hate and violence towards, sexual minorities. Our friend and colleague Rasha Younes (@Rasha__Younes) spoke of this at our launch event:

The state disseminates [heteronormative] discourse through values, traditions, religions.
Though the motivation is far from these ideals, the state weaponizes these loose imaginaries
for its political, geo political, capitalist and patriarchal gains. […] State-sanctioned
killings… reflect the larger political agenda for which LGBT people are an obvious target
and scapegoat. (Rasha Younes, Human Rights Watch LGBT Rights Program)

This report is divided into two parts: the first considers the death penalty, the second examines alternate forms of state-sanctioned killing. In Part One of the report, we identify 11 states in which the death penalty may be imposed for same-sex sexual acts. Since 2015, individuals convicted of same-sex sexual acts have been executed in two of these countries: Iran and Saudi Arabia. In Nigeria, state agents have taken active steps to enforce similar laws – individuals have been arrested, detained, and in some cases even convicted, for same-sex intimacy, though no executions have been reported. Though the majority of the 11 states appear to be inactive insofar as the execution of sexual minorities is concerned, the mere retention of the death penalty in law is of grave concern, given that these states may mobilise their laws and start executing at any given time. Moreover, the constant and inescapable reality of the death penalty – no matter how remote a possibility – is enough to detrimentally impact the lives of sexual minorities living in these jurisdictions:

‘[The] death penalty becomes a dark shadow for a lot of people—maybe a lot of people
don’t experience or are not being condemned to be executed, but this shadow is
existing in their life.’ (Interviewee)

In Part Two of the report, we look beyond the death penalty. We identified an additional three ways in which states are complicit in the killing of sexual minorities. Whereas the death penalty is a legal possibility in 11 states, we identified alternate forms of state-sanctioned killing in at least 23 countries. 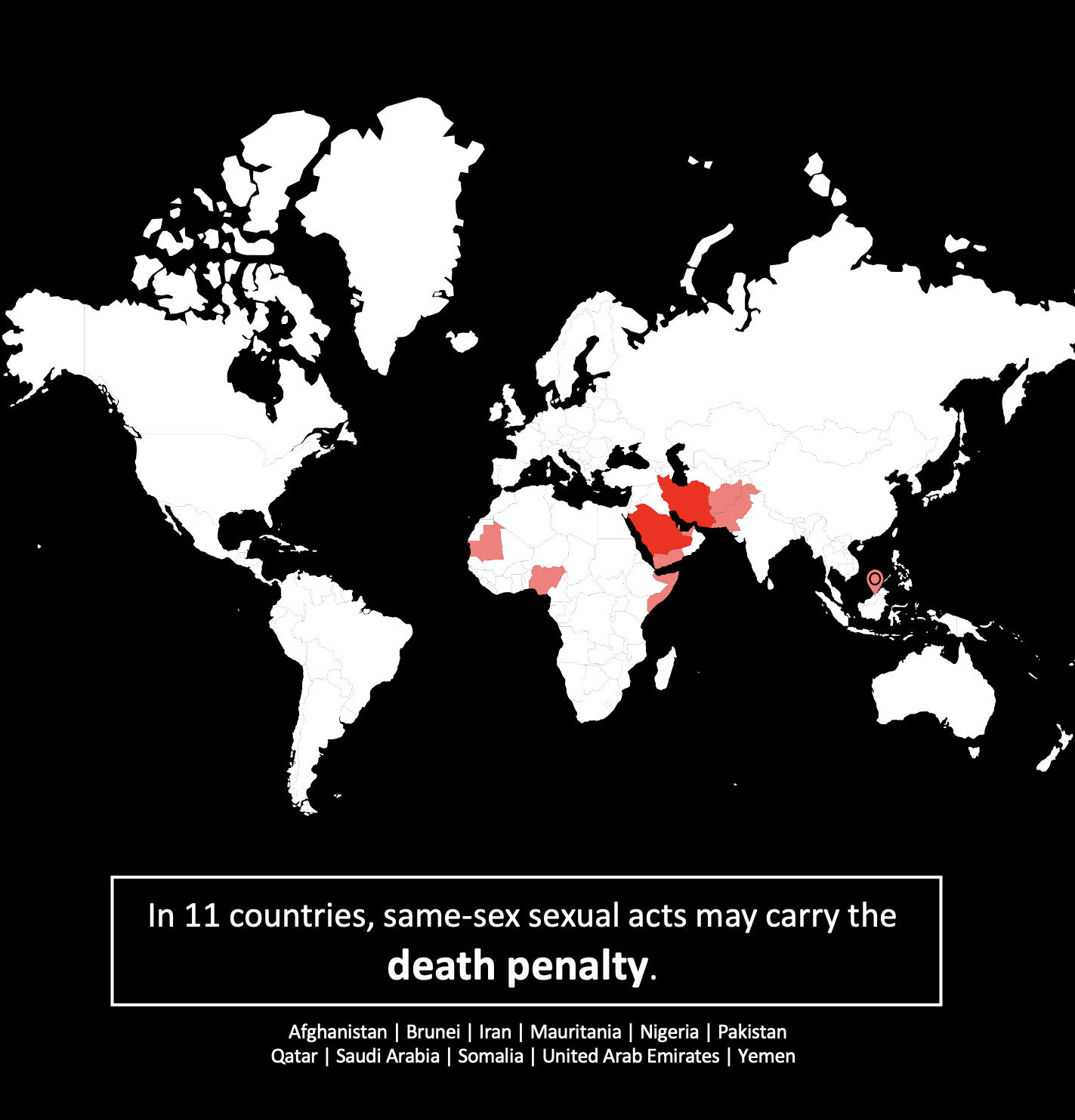 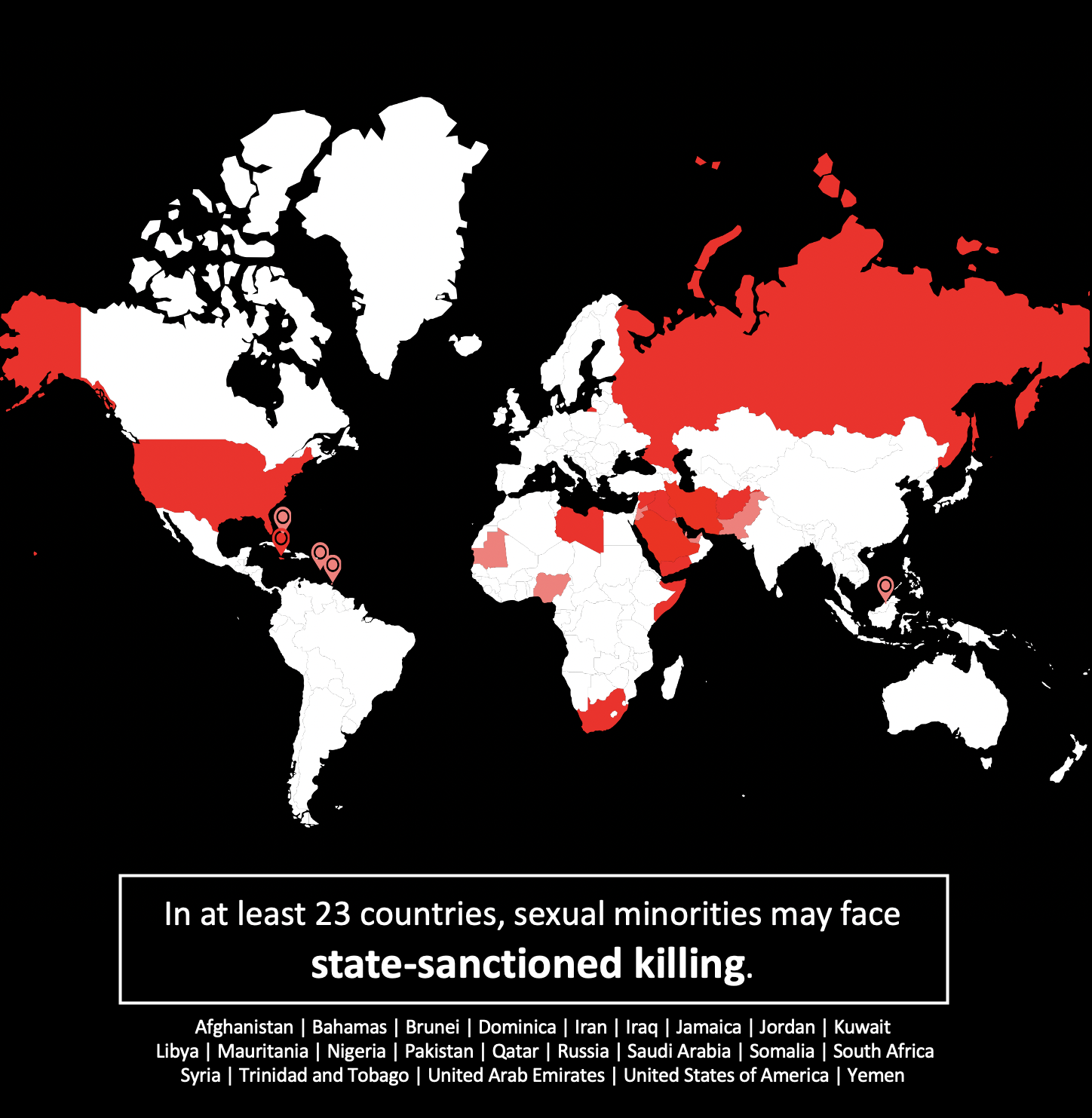 The first – and most direct – form of such violence is the extrajudicial killing of individuals by state actors, on the basis of their actual or perceived sexual orientation. Between 2017 and 2019, state-perpetrated ‘gay purge’ campaigns were carried out by state actors in Chechnya, a Russian republic situated in the North Caucuses region. These campaigns were characterised by the enforced disappearance, arbitrary detention and torture of more than one hundred persons perceived to belong to sexual minorities, the majority of whom were same-sex-attracted men. Some of these men died in custody. Others remain disappeared. Others were released into the custody of their families, to whom the state guaranteed immunity from prosecution should they kill their gay family member:

One day, all my relatives were informed about the fact that I was detained. […]
He [Magomed Daudov, the spokesperson of the Parliament of the Chechen Republic]
talked to our relatives, saying that we brought disgrace to the nation and to our
families. He told them that if they hono[u]r the traditions, they must kill us. And that
if they did everything, they would not be punished for it. (Testimony of a victim
quoted in Russian LGBT Network and Milashina, 2017:17)

In other instances, extrajudicial killings of sexual minorities were carried out by insurrectionist groups: in Afghanistan, Iraq, Libya, Somalia, Syria, and Yemen, insurgent groups exercising de facto governance in the default of the state carried out quasi-judicial executions of persons perceived to be sexually diverse.

The second category of killing in which the state is complicit is that which is subject to lawful excuses, the operation of which constitute the state’s tacit allowance of such violence being committed against sexual minorities. In these instances, rather than perpetrating the violence firsthand, the state sanctions the killing after it has taken place. In numerous states, legislation carves a distinction between honour killing and murder. In these jurisdictions, it is possible for a killer to claim that his or her homicidal actions are justifiable on the basis that the sexually-diverse victim needed to be killed to restore honour to the family or community. We identified cases in Iran and Jordan where killers received reduced sentences – or were acquitted entirely – upon claiming that they had acted in such a manner. In other jurisdictions, homicide is alternatively excused on the basis of the so-called ‘gay panic’ defence. This defence operates so as to mitigate – or altogether eliminate – the culpability of a heterosexual man who alleges that he killed a gay man after ‘panicking’ upon discovering the victim’s sexual orientation. Since 2015, this defence has been identified in Jamaica, South Africa, Trinidad and Tobago, and the United States of America.

The third category of state-sanctioned killing is the state-sponsorship of conversion therapies of such inherent violence that they directly result in death. In Iran, gay men – rather than trans persons – are coerced into undergoing state-sponsored sex-reassignment surgeries, which are promoted by the state as an alternative to the death penalty. At least three people are known to have died from such surgeries, carried out in conditions falling far short of medical and ethical standards.

State complicity in the killing of sexual minorities extends far beyond the boundaries of the death penalty. An examination of death penalty practice alone would have overlooked more than half of the states identified as being complicit in such violence. But to do so, we need information: ‘documenting these human rights violations is crucial to inform advocacy efforts to bring about change and ensure states abide by their international obligations.’ (Lucas Rámon Mendos, ILGA). As noted at the beginning of this report, testimonies and statistics of state- sanctioned killing of sexual minorities are extremely difficult to uncover. In writing this report, we heavily relied on local media reports and information gathered by local activists. We found data collected by Human Dignity Trust, ILGA, Abdorrahman Boroumand Center for Human Rights, The Cornell Centre on the Death Penalty Worldwide, and Where Love Is Illegal extremely valuable. Our ability to accurately and comprehensively document, examine and respond to the state- sanctioned killing of sexual minorities depends on the resources available to local organisations and the courage of local activists who risk their security to make invisible deaths visible. We hope that this report informs the international community, death penalty and LGBTQI+ scholars and activists the extent to which deaths of same-sex attracted people can be attributed to the state.