Fati: An Innocent Woman Sentenced to Death for Terrorism After Being Falsely Accused by a Rejected Suitor

Fati grew up in Mokolo, a small town in the county of Mayo-Tsanaga in Northern Cameroon, in a poor family. Her mother tongue is Mafa, a local language. Growing up, she spoke no French and only a little Fulfuldé, the more widely spoken language in the region. As a child, she attended school for only two days. Her mother forbade her from receiving an education, declaring that the family could only afford to send her brothers to school. As a result, Fati can neither read nor write. After marrying her husband when she was 15, she moved to Kolofata, her husband’s hometown further north. Fati cultivated peanuts, produced peanut oil, and sold biscuits. Her husband used the leftover peanut powder to coat meat skewers that he then sold. Their life was one of poverty and hardship. Fati gave birth ten times but only three of her children survived. Today, they are 13, 16 and 20 years old.

In September 2015, after 20 years of marriage, Fati’s life was upended when Boko Haram attacked Kolofata. Fati’s husband died in the bomb attack, along with several other people.

Boko Haram fighters frequently cross the Nigerian border to mount attacks on military and civilian targets in villages of the Far North region of Cameroon. In response to this constant threat,  civilian-led vigilance committees in many villages of the region have been set up. The committees are informally structured groups made of community-based volunteers whose main function is to monitor people’s entry and exit into and from their villages, and to inform the authorities about suspicious activities. There have been credible reports that vigilance committees have acted on denunciations motivated by personal conflicts, which have in some cases led to innocent individuals being sentenced to death for terorrism.[i] Until his death, Fati’s husband was the head of their local vigilance committee.

According to Fati, her neighbor, who was also a member of the vigilance committee, had been pursuing her romantically for some time, without her ever reciprocating. After her husband’s funeral, he asked her to marry him. Fati refused. Angered by her rejection, he threatened to denounce her as a member of Boko Haram if she continued to refuse him.

Several months later, in January 2016, Fati’s neighbour and other members of Kolofata’s vigilance committee arrested her and took her to a military camp. On the way, they assaulted her so violently that she was unconscious by the time she arrived at the base. There, the committee accused her of being complicit in the Boko Haram attack that had killed her husband. Four committee members told the police that they had heard—though they never specified from whom—that Fati had known about the attack beforehand and that she had allegedly mentioned it to her husband and other villagers.

For three months, Fati was detained at the military base, where she was relentlessly interrogated and threatened at gunpoint. She did not understand French, the language of the investigation, and she spoke little Fulfuldé, the local language spoken by most of her interrogators. No one provided her with an interpreter or told her that she could request a lawyer. Mistreated and intimidated, without legal representation and with no understanding of the accusations against her or the legal process, Fati nevertheless kept repeating that she was innocent. 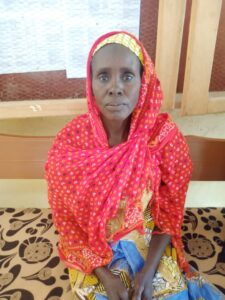 The investigation did not reveal any evidence of Fati’s involvement with the militant group. The villagers’ testimonies, which constitute the only evidence against Fati, are strikingly vague, contradictory, and rife with gender bias. Although they are only three or four sentences long, the declarations disagree on what Fati said, to whom, and whether this was before or after an alleged trip to Nigeria. Moreover, two of the witnesses reported unsubstantiated rumors of marital strife between Fati and her husband. One of them went so far as to report a rumor that Fati was secretly married to a second husband in Nigeria, a Boko Haram fighter–an allegation that the prosecution never backed up with any evidence, and indeed that Fati never had an opportunity to repudiate. By destroying Fati’s character and presenting her as a faithless wife, these testimonies follow the discriminatory strategy the Alice Project has uncovered in so many other capital prosecutions of women: first, through debasing the female defendant’s character by accusing her of transgressing gender norms, and then by tying those transgressions to the alleged offense.

In October 2016, after ten months of detention without charge, Fati was brought before Maroua’s military tribunal, where she was charged with acts of terrorism. During the hearing, Fati was represented by a trainee lawyer whom she had never seen. Indeed, she never exchanged a single word with the person tasked with defending her. During the trial, Fati did not hear him say anything in her defense. After an expedited trial process at which no witnesses testified, the court convicted Fati and sentenced her to death by firing squad, solely on the basis of the rumors reported by her neighbors. Convicted of a crime of which she was innocent, Fati was in shock:

“I felt completely abandoned, I was alone, without any support, there was no one to explain things clearly so that I could understand. I did not understand anything because I was brought to the court where no one asked me any questions. I was in prison when a guard told me that I had been convicted. What was confusing is that I had waited for my chance to speak to the court but nothing happened, I was only informed of my conviction.”

Fati has been incarcerated since 2016 at the Maroua Central Prison, which is notorious for its life-threatening unsanitary conditions and severe overcrowding (built for 350 prisoners, the prison houses over 1,400 individuals). At the prison, Fati has inadequate food and drinking water and almost no medical care. As she describes,

“I feel weary, tired because I have been imprisoned for almost six years. Our prison cell is a room of about 3 by 4 meters and there are between 14 and 17 of us inside.  There are bunkbeds we sleep on, but those who cannot find room on a bed sleep on the floor. ”

Like many indivuals suspected of terrorism offenses, Fati has not received a single visit since her arrest. When she was first detained, her family tried to visit her at the military camp but they were prevented from entering. Fati has had no contact with her family, including her children, since her arrest. Fati’s youngest child was only seven at the time, and her two youngest children still live in Kolofata, with the Blama, a local leader. Her eldest child lives in Nigeria with her brother, but she has been unable to obtain his phone number despite numerous requests.

In 2019, Cameroonian lawyer Nestor Toko, President of the Network of Cameroonian Lawyers Against the Death Penalty, traveled to Maroua and met Fati in prison. Convinced that she had been wrongly accused and concerned by her account of her arrest and trial, he agreed to represent her pro bono and has helped Fati appeal her conviction.

Fati is now awaiting a decision of the appellate court.

This profile was written on the basis of interviews with Fati and Maître Nestor Toko  (Fati’s lawyer). It is published with Fati’s consent.