Merri Utami is a grandmother who has spent 19 years awaiting execution in Indonesia. Merri was convicted of illegally importing drugs into Indonesia, but she insists that she had no knowledge of her role, and that she was in fact targeted and manipulated by professional drug traffickers. Like many women sentenced to death for drug offenses, Merri’s life has been shaped by poverty, abuse, and exploitation. Yet the court that sentenced her to death never learned about her history because her initial trial lawyer – like so many who defend women sentenced to death – was incompetent.

At a young age, Merri entered a brutal marriage. Merri’s husband was a violent man and a heavy drinker. He beat her regularly, particularly when he was drunk. Merri’s parents wanted her to leave him, but Merri felt she didn’t have the power – or the financial means – to do so. More than twenty years later, the marks of his violence remain on Merri’s body. They had two children: Yosi, a son, and Devi, a daughter. Yosi was born with a defective heart valve, and the cost of treating his condition consumed much of the family’s meager resources. Merri’s husband was a gambler, and his debts added to the family’s financial stress. Pressured by her husband, and the need to treat her sick son, Merri left to work as a domestic worker in Taipei.

Once in Taipei, Merri worked as a caregiver for an elderly woman, where she was paid 10,000 yen ($94) per month. Her children went to live with an aunt in East Java. Merri missed her children desperately and she wrote long, loving letters to them in which she passed on life lessons, trying to parent from afar. Merri returned home to Indonesia once, hoping that she could stay. But Merri’s husband had not reformed in her absence, and his beatings resumed. She quickly returned to Taipei, and they separated. After some time, an acquaintance in Taipei introduced her to Jerry, a Canadian businessman living in Indonesia’s capital, Jakarta. They began a relationship. 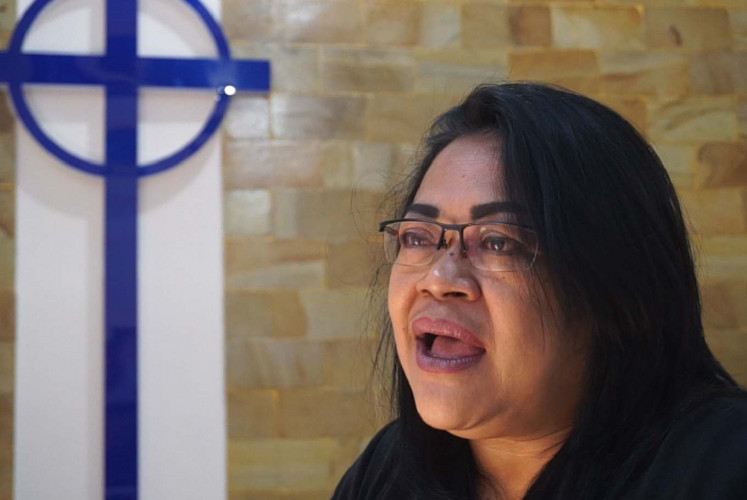 Merri Utami inside the church she helped to build.

While her husband had been vicious, Jerry was kind. One day, Jerry surprised Merri with tickets to Nepal. He told her that they would go on holiday and afterwards they would marry. They spent a few days in a hotel in Nepal, but one day Jerry unexpectedly announced that he had to return to Indonesia early for work. He apologized profusely and told her to enjoy the rest of her holiday, leaving her a bit of money to do so. Jerry said that Merri’s purse was too old and ugly and, as an apology for his early departure, he had instructed a friend to get her a new one. When Jerry’s friend gave Merri her new bag, she questioned why it was so heavy. Jerry’s friend explained that it was a good quality, expensive bag, which was heavier than a cheap bag. Merri, who had never owned an expensive bag, believed him.

Merri returned to Indonesia, but after leaving Tangerang airport, she realized that her suitcase, which had the new purse from Jerry inside it, was missing. She re-entered the airport and reported her baggage missing to Lost and Found. She was swiftly approached by airport officers who led her into a small room where her new purse was on a table. The officers pricked the bag with a needle, and white powder started pouring out. The lining of the bag was stuffed with heroin. Merri was shocked, and quickly tried to call “Jerry” for help, but his phone had been disconnected. From the airport, two police officers escorted Merri to a nearby hotel where they began to interrogate her. Merri insisted that she had no knowledge of the drugs that were inside the purse. The police held a gun to her head, kicked her in the face and slapped her, leaving her with a split lip and wounds covering her body. Despite their brutality, she refused to confess.

Because Merri couldn’t afford a lawyer, she was assigned one by the government. At her trial, her lawyer did not present a single witness or expert to testify on Merri’s behalf. He failed to tell the court about Merri’s background of domestic violence. He likewise failed to explain her isolation and vulnerability to exploitation as a migrant domestic worker. In the Court’s judgment, the all-male panel of judges observed that Merri’s testimony was fractured and unclear. They reasoned that this was indicative of her role in a highly secretive international drug syndicate, instead of considering that it might in fact reflect the effects of trauma combined with her low level of education. They wrote that Merri did not look sufficiently remorseful throughout the trial. On May 20 2002, Merri was convicted of importing heroin and sentenced to death by firing squad. (This verdict was later upheld by the Supreme Court in 2003.)

Shortly after her conviction, Merri received the news that her son, Yosi, had died. She said she felt as though her “chest was… smothered because I cannot run and hug his body.” Meanwhile, Merri continued to face daily indignities as a woman within the prison system. The prison, for example, did not provide sanitary napkins, and had almost no gender-sensitive healthcare services.

Nonetheless, Merri fought to make her life bearable in prison. Merri learned to garden, planting and nurturing trees that bore fruit and cultivating the natural life around her. She became an active church member, working with other prisoners to put on Christmas and Easter plays. Merri composed two religious songs. She also received numerous certificates for participating in prison programs. Merri explains that she was trying “to make peace with the unimaginable environment.” In 2005, Merri was reunited with her daughter, Devi, and the two restored the bond that had been damaged by Merri’s incarceration. Devi would sometimes bring Merri’s favourite foods, such as sambal (chilli sauce), to the prison. After some time, Devi became a mother herself.

Late one night in 2016 two prison guards woke Merri and informed her that she was to be transferred to Nusa Kambangan, or “Execution Island” as it is colloquially known. Devi frantically called Merri’s state-appointed lawyer, but he did not return her calls. The Legal Aid Institute of Indonesia (LBHM) heard about Merri’s case, and contacted her to offer their legal services. They agreed to defend her just days before her scheduled execution, and rushed to submit a clemency petition to the President of Indonesia before it was too late. 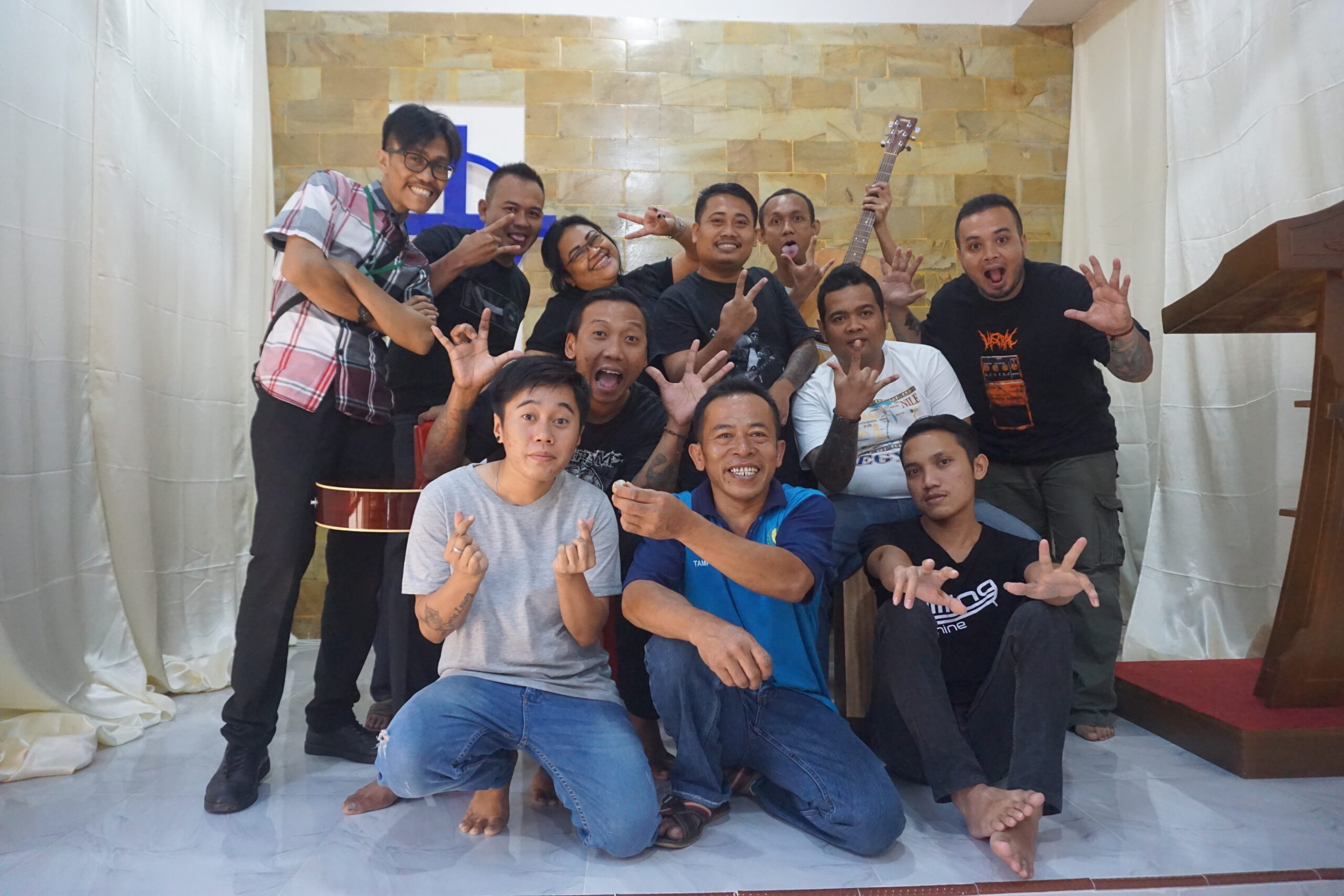 The night before Merri’s scheduled execution, Devi came with her infant child to say goodbye to her mother. Merri describes that moment as “the height of [her] sorrow.” On July 29 2016, four people who at been imprisoned at Nusa Kambangan with Merri were executed, but Merri was spared. Four years later, however, Merri remains in prison under sentence of death. Her request for clemency has gone unanswered by Indonesian President Joko Widodo. Merri wants to see her grandchildren grow up. She also wants to prevent others from falling into the same trap as she did. In her words, “I want to be alive sharing my experience so that no other vulnerable women [will] be manipulated.”

This profile was written on the basis of interviews with LBHM (Merri’s lawyers), court records, and publicly available information. It is published with Merri’s consent.

You can add your name to the petition asking the Indonesian government to grant Merri clemency here: Change.org/Grasi-Untuk-Merry

If you wish to support Merri’s campaign via social media, you can upload a photo of yourself holding a message which asks the president to grant Merri clemency, tagging @lbhmasyarakat and @jokowi.